We are delighted to invite you to a industry and networking event on December 1, 2022 at the Studios du Rhin in Strasbourg.
The event will focus on the current challenges of resource-efficient production in international co-productions. What challenges do country-specific ecological standards pose and what is the role of the CO2 calculators used in each case? What steps are necessary to successfully implement international co-productions in line with the applicable standards in the future?

These and other questions will be discussed by international industry representatives in Strasbourg on December 1. In addition, numerous green start-ups will present their innovations.

We are looking forward to the exchange! 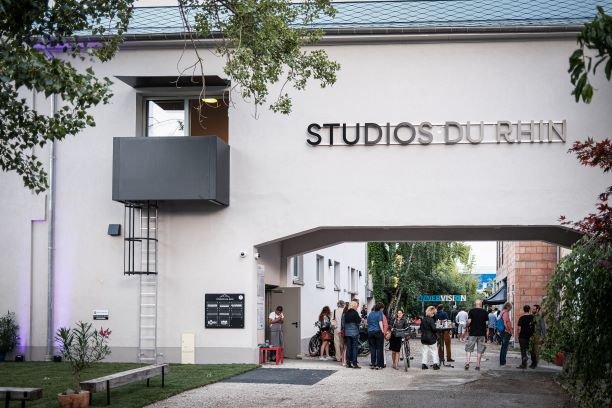 1. Making an eco-responsible film on a European scale: 2 case studies

We present two European co-productions that shot European and Sustainable and the obstacles they encountered.

With the participation of:

We present start-ups that can work together with big players to bring about sustainable change in the media industry. Be curious about a lot of European start-up innovation power!

You are willing to participate and present your start-up ? Applications are open here until Friday, November 18th.

From January to June 2022, with the assistance of coaches and professionals, students from France, Germany and Switzerland worked in tri-national teams to design series to be broadcast on a social network.

Pitched at the Alentours Forum on June 30, their projects will become reality in the coming weeks.
Rendezvous on October 31 in Basel during the Basler Filmtreff to review the progress of their ideas with producers and broadcasters.

In the framework of the Co-production training Days CinEuro and the Spielfabrique organize an event around video games!

Debate| Can Stuttgart become a model city for greenshooting?

In times of climate change, it is becoming increasingly important for every industry to address the issue of sustainability. The film industry is not exempt from this, as it continues to produce very high CO2 emissions. As of this year, a voluntary commitment is intended to ensure that film productions become more ecologically sustainable.

MFG Baden-Württemberg invites you to a CinEuro panel discussion where representatives of the city of Stuttgart, the Film Commissions Region Stuttgart and Freiburg as well as professionals from the region will discuss the question “Can Stuttgart become a model city for greenshooting? The aim of the event is to provide impulses for greenshooting in Stuttgart in order to maintain the city as an attractive cross-border film location and make it fit for the future.

CinEuro is pleased to invite you to a networking cocktail during the MIFA – International Animation Film Market!

Take the opportunity to exchange with studios, filmmakers and other animation industry players from France, Germany, Luxembourg, Belgium and Switzerland and with CinEuro’s partners.

This year, join CinEuro for a Networking Event organized during the 75th edition of the Cannes Film Festival, taking place from May 17 to 28, 2022.

The opportunity to meet CinEuro partners and cross-border professionals from France, Germany, Switzerland, Belgium and Luxembourg.

Participation on registration depending on the availability of places.

As part of the Saarland Filmmakers’ Weekend, Saarland Medien is pleased to invite you to a Masterclass given by Markus Bensch, location scout and production manager.

Markus Bensch‘s experience includes productions such as The Bourne Supremacy, The Hunger Games: Mockingjay Parts 1 and 2, and Steven Spielberg’s Bridge of Spies.

He will share his experience on cross-border filming and give advice on acquiring locations in the Greater Region.

Translation into French or English will be provided.

An event organized by the Film Fund Luxembourg as part of the Luxembourg
City Film Festival VR Pavilion.
With a networking lunch.

VR Day will bring together international experts in Luxembourg to discuss the state of XR two years into the global pandemic.

This industry event is a unique opportunity for XR and audiovisual professionals from the CinEuro area and beyond to exchange, as well as to extend their professional network and to learn through case studies and round tables focusing on challenges, trends and opportunities of virtual and mixed reality today. 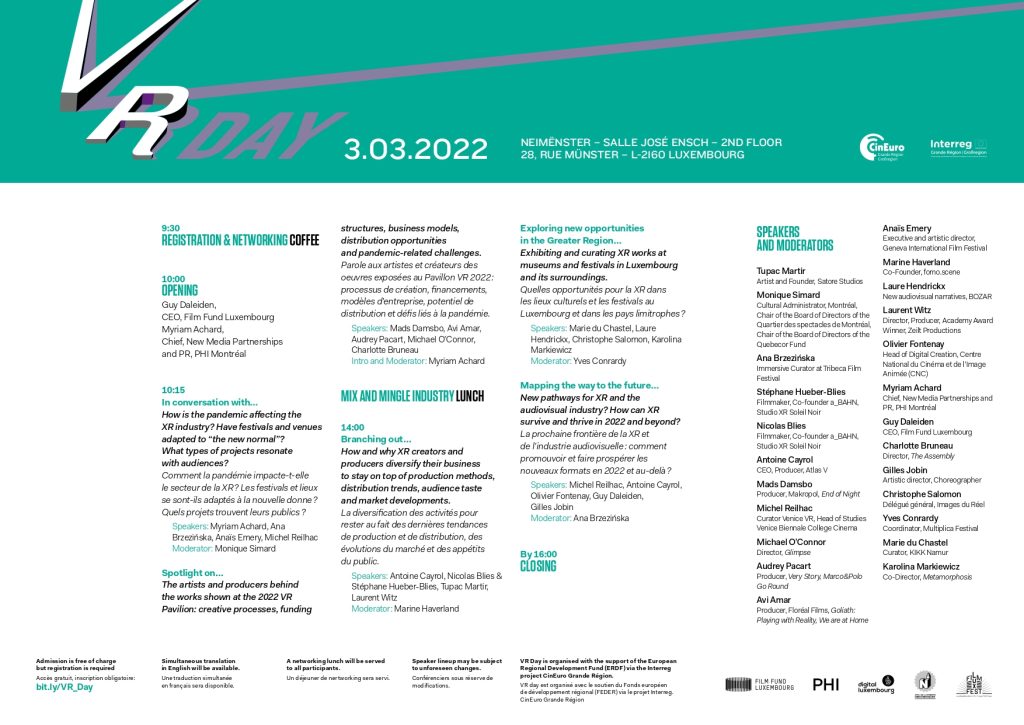 Unfortunately, we have to cancel this event. The health situation and the announcement of the Berlinale Film Market going online has a direct impact on the Networking event.

We apologize for the inconvenience.

CinEuro is pleased to invite producers and filmmakers to a networking event held during the Berlinale!