The 2022 edition of the Forum Alentours, the annual flagship event for cross-border film and audiovisual co-production between Germany, France, Switzerland, Belgium and Luxembourg, will take place from June 28 to 30 in Strasbourg.

Join us for a rich and eclectic program:

Writers’ workshop: Develop your content and your film ideas!

Writing a screenplay is a sensitive, sometimes fragile and very personal process.
Long before resorting to the dramaturgical toolbox, the rules of which are handed down in numerous textbooks and courses, it is first of all a matter of confronting one’s own material – and thus oneself – and finding the personal, unique attitude with which one can tell a story and no one else.

What does this mean in concrete terms? What are the steps in developing a story? What are the chances, the risks and the singularities offered to the author? Are there any rules that cannot be deviated from in this work that draws its strength from the freedom of the mind? This workshop will address the benefits of teamwork in this process by asking how teamwork works in this process.

This workshop will be led by Julia Willmann, a long-time screenwriter and professor of content development in Germany (e.g. at the Deutsche Film- und Fernsehakademie Berlin) and Switzerland (e.g. at the ZHdK). Prior to that, she worked for Arte in Strasbourg for a long time and as a director in Cologne. Julia grew up in Freiburg im Breisgau, studied Romance and German languages and literature as well as media studies in Aix-en-Provence (FR), and then film making in Berlin. She is therefore very familiar with all the regions that make up the Upper Rhine.

The 2022 edition of the Forum Alentours, the annual flagship event for cross-border film and audiovisual co-production, will take place from June 28 to 30 in Strasbourg.

If you would like to attend the Forum Alentours – Rhenish Co-Production Meeting, you can register now – registration deadline is 17 June 2022!

You have the choice between two accreditation options:

Full coproduction pass (Events + B2B)
Accreditation to attend events and B2B meetings for:
– Promoters (funds, distributors, TV channels, sales agencies).
– Producers who do not have a project in the catalogue but are aiming for an international strategy and are looking for co-production partners.

Event pass
Accreditation for events of the Forum Alentours 2022 for all possible participants without a project and without B2B.

The registration for this year’s edition of the Forum is required under the following form: 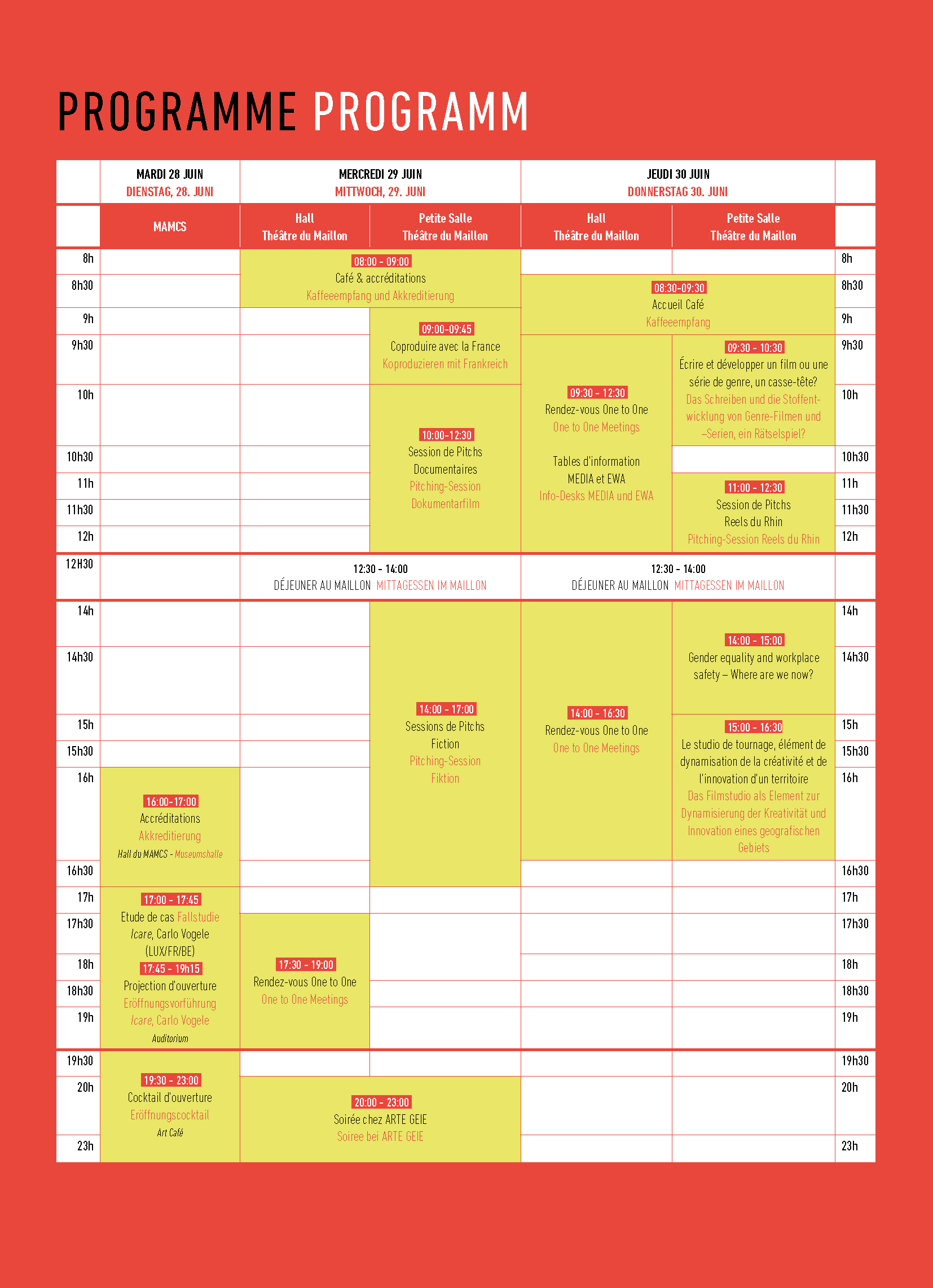 CinEuro is pleased to invite you to a networking cocktail during the MIFA – International Animation Film Market!

Take the opportunity to exchange with studios, filmmakers and other animation industry players from France, Germany, Luxembourg, Belgium and Switzerland and with CinEuro’s partners.

This year, join CinEuro for a Networking Event organized during the 75th edition of the Cannes Film Festival, taking place from May 17 to 28, 2022.

The opportunity to meet CinEuro partners and cross-border professionals from France, Germany, Switzerland, Belgium and Luxembourg.

Participation on registration depending on the availability of places.

Balimage is pleased to invite you to a workshop around virtual production!

Basel filmmaker Alex Martin reports on the Basel VP studio plans and, together with VP specialist Marlon Candeloro, shows how the method actually works.  In a hands-on workshop lasting almost three hours, filmmakers from all departments will get a first insight into this new way of shooting. Camera operators and directors can familiarize themselves with a tracked ARRI cam and real and virtual 3D realtime locations. Equipment, props and lighting have trouble of matching the interface between real and virtual. The production staff can recalculate time and cost comparisons of this efficient method. The sustainability team receives suggestions for an extremely CO2-reducing measure. Last but not least: Actors no longer have to imagine locations in the green screen studio, but can perform in front of visible real-time backdrops. The target audience of this workshop is anyone who has always wanted to learn about this method.

Moderation: Alex Martin and Marlon Candeloro in collaboration with Balimage

After lunch, we will continue with “News & Tour” – information on how to facilitate filming:

You are a producer in Wallonia, Brussels, Luxembourg, Saarland, in Rhineland-Palatinate, Baden-Württemberg, in the Grand Est or in the North-West of Switzerland (cantons of Basel-City, Basel-Landschaft, Aargau…)?

Do you have a project in progress for which you are looking for a co-producer from a neighboring country?

CinEuro invites 10 producers to participate in “Locarno Pro”, the professional market of the Locarno International Film Festival (Switzerland): a unique opportunity to meet producers from different countries, to exchange ideas and to glimpse new collaboration opportunities.

The selected candidates will benefit from the coverage of:

By applying, participants commit to travel to Locarno from August 5 to 7, 2022 (travel and stay at the expense of the candidates) and to participate in all the planned highlights.

The CinEuro project partners will then evaluate the applications and the selected candidates will be informed in May 2022.

Golgota Productions is an independent production company created in 2014.

Our desire is to help and accompany our authors in all the stages of making their films.